Micro Four Thirds lenses are not only known for longer focal lengths and unique technological innovations, they’re also loved by travel photographers for their small and compact design.

Travelling requires packing light, and the best Micro Four Thirds lenses for travel must meet all the criteria needed for travel photography, including being lightweight and compact.

Micro Four Thirds lenses have exploded in popularity as of late. There are numerous wide range of lens options available on the market that you can choose from, especially if you plan to use them for travel photography.

Our picks for the best Micro Four Thirds lenses for travel can be used on either Panasonic or Olympus cameras. Since both the Micro Four Thirds cameras and lenses are flexible and light, it is easy to switch lenses on the road. 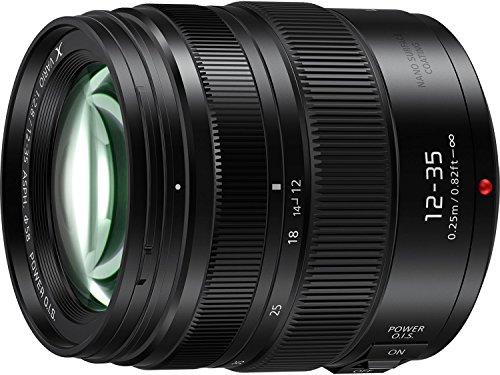 The Lumix G Vario 12-35mm f/2.8 is a zoom lens that offers almost all of the features and functionality that you will need when doing travel photography on a Micro Four Thirds camera.

The lens has amazing sharpness, and it has an impressive performance, great depth of field, and solid build quality, including weather sealing.

The zoom ring is rubberized, the focus ring has a similar texture, and its bare metal is cool and comfortable to the touch. It also has Panasonic’s Nano Surface Coating feature that can help reduce unwanted ghosting and flaring.

The lens has an built-in image stabilization feature, a feature that the Panasonic 20mm f/1.7 II does not have. It makes it ideal for handheld photography and videography which is important for travel photography.

However, since the aperture of the lens is too narrow, it can’t be used in low light conditions. Also, some distortion and chromatic aberrations are visible when adjusted to 35mm focal length. 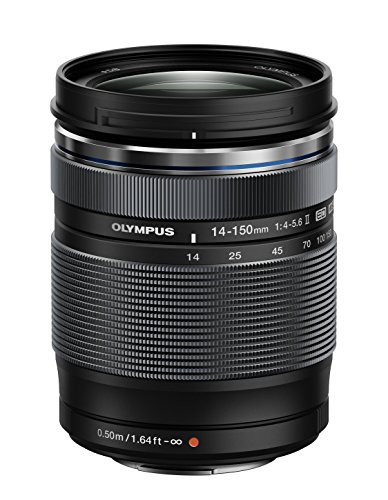 The Olympus M.Zuiko ED 14-150mm f/4.0-5.6 II is the best Micro Four Thirds lens to get if you are looking to take portrait pictures.

The optics and the zoom range are one of the best on the market, and the build quality is superb.

A hood is included for protection, and the front filter ring can accommodate 58mm filters to add to the distance and reach subjects that are far away. It is also weather-sealed.

Unfortunately, it is not the best lens for shooting in low light conditions due to its narrow aperture, distortion, and soft edges will appear on the images, unlike the Panasonic 20mm f/1.7 II that has a wide aperture.

Also, it does not have an image stabilization built-in, and using it in handheld photography will result in distorted images. Using a tripod or a stabilizer when filming is the best way to go. 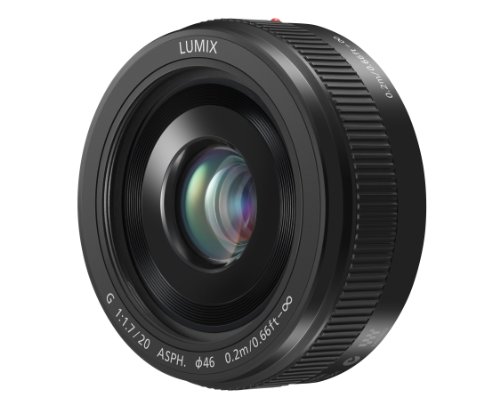 Due to its compact size and affordability, the Panasonic 20mm f/1.7 II is one of the most popular and beloved Micro Four Thirds lenses out there.

The f/1.7 aperture is impressively fast, so if size and speed are your priorities, then this lens is a great option.

To achieve its amazing speed, Panasonic added a 7 element, 5 group design into the lens barrel, which includes two aspheric elements to help reduce the appearance of distortion and chromatic aberration in the images.

The Panasonic 20mm f/1.7 II has a super solid build with a metal exterior. When it comes to manually focusing it, you will only be working with a small sliver of a focusing ring. There is a 7-bladed aperture system that gives an attractive and smooth effect to out-of-focus highlights. The minimum focus distance is almost 8 inches.

The biggest complaint about the Panasonic 20mm f/1.7 is the autofocus. It is slower than most lenses on the list and it also produces noise when it is in autofocus mode.

Also, the lens is not weather-sealed, so it is best to cover it when using it outdoors. The lens does not have image stabilization, and using it handheld may affect the images. 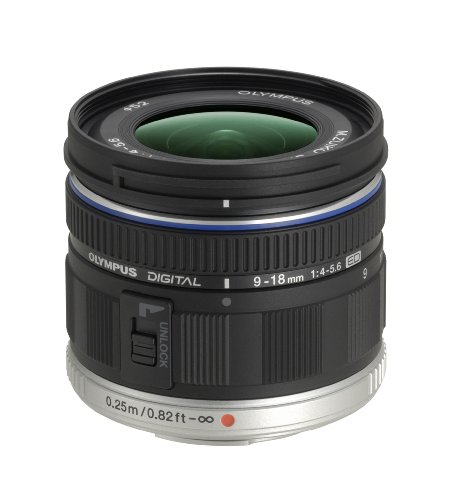 The Olympus M.Zuiko 9-18mm f/4-5.6 is the third Micro Four Thirds lens that Olympus has manufactured, and it covers the wide-angle end of the spectrum.

The lens is equipped with aspheric elements that prevent flaring and ghosting. It also has Extraordinary Dispersion or ED and High Refractive or HR glass elements that can help minimize the appearance of chromatic aberration, a rainbow-like effect on images.

The lens has an internal focus feature, so the lens does not change its shape when zooming in on the subject. It is also designed to provide silent operation for movie recording, a feature that the Panasonic 20mm f/1.7 II does not have.

However, the lens is not equipped with image stabilization, distortion will be visible if it is used handheld. Also, with its focal length and aperture, bokeh can’t be created and the images are not that sharp, especially around the corners. 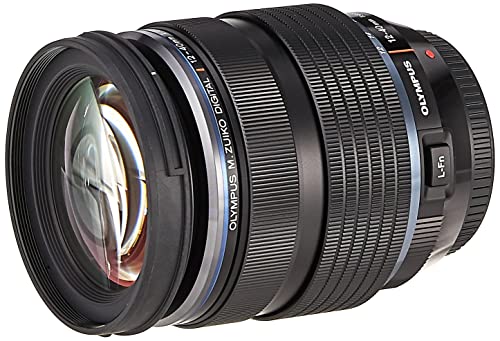 The Olympus M.Zuiko Digital ED 12-40mm f2.8 PRO adds a professional-level zoom to the Micro Four Thirds lens lineup. It has sharp optics, produces clear and crisp images, and it is weather-sealed, so you can comfortably use it outdoors.

The lens has a standard range for zoom lenses and its f/2.8 aperture makes it great for travel photography. Its build is solid and sturdy, and it has a textured zoom ring and narrow manual focus ring, so it is easy to reach and comfortable to operate.

The clutch system can be toggled between manual and autofocus mode, just pull back on the ring and the lens changes to manual operation, or you can push the ring forward to go back to autofocus.

Unfortunately, the lens does not have an image stabilization system, unlike the Panasonic Lumix G Vario 12-35mm f/2.8. This means if you are going to use it handheld, distortion will be visible if the camera shakes.

Also, it does not have aspherical elements, so flaring, ghosting, and chromatic aberration will appear without proper lighting and angle.

Features to Consider in Micro Four Thirds Lenses for Travel

However, being lightweight is not the only factor that needs to be considered when purchasing the best Micro Four Thirds lenses for travel.

From landscape, portrait, wide-angle and more, each scene needs a different focal range. For example, if you want to capture images of nature or wildlife, you can get the Olympus 14-150mm f/4 due to its impressive maximum range of 150mm, which can zoom in on the subject from far away without compromising the background.

The width of your aperture contributes to the outcome of the bokeh on images. For Micro Four Thirds lenses, it is best to get ones that have wide aperture because they can let you take pictures even in the dark, and that will come in handy while traveling.

The Panasonic 20mm f/1.7 II has a wide aperture of f/1.7 that lets enough light in to let you capture images in low light conditions, and you won’t have to worry about distortion or dark spots.

Weather-sealed lenses can survive splashes, dust, dirt, and other elements, and it contributes to the longevity of your lens.

Image stabilization is an important feature for Micro Four Thirds lenses because there is a massive chance that you’ll be holding onto your camera while you walk around and go on trips.

The image stabilization feature helps compensate for any slight movement that you do while holding the lens. It can assist you in shooting at slower shutter speeds to prevent blurry pictures.

The Panasonic Lumix G Vario 12-35mm f/2.8 is the lens on the list with a built-in image stabilization system, so you won’t have to use a tripod just to get a clear image.

If you like to take discrete pictures, especially live subjects, then a Micro Four Thirds lens with silent autofocus is the one for you. This feature is very important when you are traveling because chances are, you will be encountering wildlife, and the last thing that you want is to startle your subject before taking a breathtaking picture of them.

Internal zoom is a feature that is often overlooked, however, it is one that is very useful in Micro Four Thirds lenses that will be used for travel.

If your lens has an external zoom feature, the length of your lens changes, and that may catch you off-guard as it also changes the balance of your camera, plus it takes time before you can focus on your subject.

Meanwhile, internal zoom remains constant no matter the zoom range. It is faster, it doesn’t change the balance of your camera, and it locks the focus on your subject almost instantly. This feature is ideal for those who always go on a nature trip when they travel, and you won’t have to wait for a few seconds to capture an image of your subject.

Why is it Called Micro Four Thirds Lens?

The lens is called Micro Four Thirds because it stands for 4:3 which is the aspect ratio of the sensor of the lens. The manufacturers of this lens, Panasonic and Olympus, chose the number because it reflects the printing size of 8×10 better than other ratios.

As for the Micro part of the name, it is based on mirrorless cameras. When the Micro Four Thirds was first introduced, it was made for DSLR cameras with small sensors.

Eventually, changes were made, and both Panasonic and Olympus created a version for mirrorless cameras, removing the space for the mirror box for a more compact camera body.

Can Micro Four Thirds Lenses Fit All Types of Cameras?

Travel photography requires high-quality lenses, one that can withstand the demand of having to be outdoors all the time. Luckily, the best Micro Four Thirds lenses for travel that we’ve picked out have all of the features that you will need to capture every amazing detail of your trip.